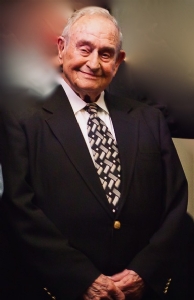 Sparks resident Valdo Renucci the World War II veteran and past city councilman has passed away. Valdo Renucci was born on September 25, 1921 and was raised in Sparks Nevada.  Renucci went to school at Robert Mitchell Elementary School, where he was held back in second grade because he wasn’t able to speak English. Despite the language barrier, he enjoyed going to school, and eventually made the honor roll. When he graduated from Sparks High School in 1940, he received a gold pin to honor his scholastic accomplishments and good grades.

On Aug. 15, 1942, Renucci was drafted into the United States Army during World War II. Renucci was sent to the 84th Training Battalion at Camp Roberts, Calif., and was deployed to Liverpool, United Kingdom. Renucci was assigned to the 314th Regiment of the 79th Infantry Division, and soon landed at Omaha Beach, where his regiment entered the battle at the Invasion of Normandy.

During his deployment, Renucci would end up fighting in four major battles: the Invasion of Normandy, a battle in Strasbourg, France, the Battle of the Bulge in Belgium and a battle in Schinnen, Holland. Toward the end of the war, Renucci’s regiment would cross the Rhine River and end up in Berlin, Germany.

"World War II is something for me,” Renucci said. "I mean, to me, to go through all that because almost everyone that you hear about, they got purple hearts and stuff like that… but I went through the whole thing, from the beginning to the end. And I was lucky. I lucked out on a lot of things.” On Nov. 28, 1945, about 3 1/2 years after being drafted, Renucci was discharged as a sergeant. He was awarded four Bronze Stars – one for each major battle that he fought in.

Renucci also served two terms on the Sparks City Council, from 1975 to 1983.  He said City Hall was a good experience because it was absolutely different than he thought it was.

As a council member, Renucci was instrumental in acquiring the new American Legion hall, promoted the installation of stop signs and helped residents with animal control issues. He also participated in the National League of Cities, a national association for city and town leaders, that allowed him to meet people locally and throughout the nation.

Renucci has also been active in several organizations throughout his life. He is a member of the Veterans of Foreign Wars, Elks Lodge, American Legion and the Sons of Italy. Renucci has served on the boards of program such as Foster Grandparents and the Children’s Cabinet, and is active in the Catholic Church.

His involvement in the organizations allowed him to meet and get to know many people. He said wherever he goes, people still come up to him because they remember him.