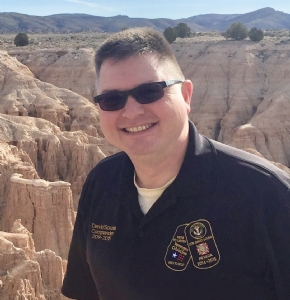 David started his military career in the United States Army in 1987 and retired on November 1, 2016 with over 20 years of service in the United States Army.
During his service in the United States Army, he served in Mombasa Kenya in Support of "Operation Provide Relief” and "Operation Provide Comfort” humanitarian missions in Somalia from October 1993 to December 1993 as a member of the Berlin Brigade. He went on to serve in "Operation Iraqi Freedom” in Abu Ghraib, Iraq from February 2003 to January 2004 as a member of the 72nd Military Police Company. David served again in "Operation Enduring Freedom” Kandahar, Afghanistan from January 2011 to January 2012 as a member of the 422d Expeditionary Signal Battalion.
Highly decorated for his honorable service Dave has been awarded the Combat Action Badge, the Bronze Star Medal, two Meritorious Service Medals, four Army Commendation Medals, seven Army Achievement Medals, the National Defense Service Medal with two Bronze Stars, the Afghanistan Campaign Medal with three Combat Stars, Iraq Campaign Ribbon and the Military Outstanding Volunteer Service Medal.
David joined the VFW in 2004, at VFW Silver State Post 3396, Sparks, Nevada. He has served as the Junior, Senior and Commander for the Department of Nevada in 2014-2015, he served on the District level, was honored to serve as the VFW National Certified Recruiter from 2006 to 2009, and served on the National Legislative Committee in 2006.
David achieved All-American Commander status on a Post level twice and was named the VFW Outstanding Veteran for the Department of Nevada in 2006.
David’s associations include a Gold Legacy Life Member of the VFW, a member of the American Legion, a life member of The Association of United States Army – General Westmoreland Chapter, a life member for the Disabled American Veterans Association, a Life Member of Signal Corps Regimental Association, member of the Enlisted Association of the National Guard, and in 2014 was appointed by the Governor of Nevada Brian Sandoval to the Veterans Suicide Prevention and Awareness Council.

David attended Truckee Meadows Community College and received his Associate of Arts Degree, and then went on to receive his Associate of Applied Sciences degree in Law Enforcement in 2000.
He currently serves at VFW Silver State Post 3396 Adjutant and is excited to be assisting all Service Members, Veterans and their Families.