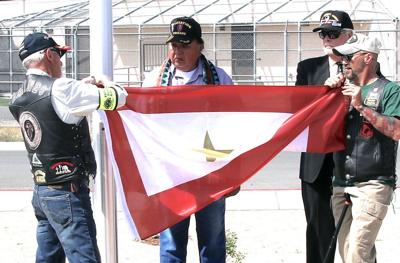 SPARKS — A memorial dedicated to Nevada families who lost a loved one in war will be unveiled in less than a month, but members of the Veterans of Foreign Wars Post 3396 in Sparks recently dedicated the flag pole and raised the first Gold Star flag in front of a small crowd of onlookers, veterans and several families who lost sons in battle.

"I hope the memorial represents everything we have here in Northern Nevada,” said David Sousa, a member of the Nevada Gold Star Memorial Foundation and former VFW commandant for Nevada. "It will be a beautiful ceremony for these Gold Star families.”

The official dedication of the Gold Star Families Memorial is June 29 at 3 p.m. at 36 Battle Way. The memorial is being built on the grounds of the new Northern Nevada State Veterans Home in Sparks with the inscriptions facing south.

Jon Yuspa, executive director of Honor Flight Nevada, has been passionate about the Silver State having its own memorial.

"It is erected for the families of the community and younger generation so they know what freedom is all about and the sacrifices,” he said.

The last Honor Flight Nevada trip to Washington, D.C. in late November included many Gold Star families and veterans. One of the stops was in Annapolis, Maryland, at that state’s Gold Star Families Memorial.

"The bonding and what they learned on that trip was the Gold Star families aren’t isolated — they aren’t suffering alone,” Yuspa said. "The veterans are suffering the same: they lost a battle buddy.”

With the help and support from many organizations, Yuspa said the foundation has been able to work expeditiously on planning and then completing the memorial by the end of the month.

Gold Star mother Sherry Zaehringer of Reno was one of two families who attended Monday’s dedication. She also flew back to Washington, D.C., on the November flight with her daughter, Nicole Cross-Scott. Her son, U.S. Marine Sgt. Frank Riddell Zaehringer III, died in combat in Helmand province, Afghanistan, from an improvised explosive device (IED) on Oct. 10, 2010. Zaehringer said she’s pleasantly surprised with the memorial’s planning and construction. She said Yuspa and Sousa and their work with the Nevada Gold Star Families Memorial Foundation has helped with the healing.

Sousa said the June 29 dedication is free and open to the public. To reserve seats go to GSMNV.org or call 775-827-9748. He also wants Gold Star families to contact him at david@GoldStarMemorial.org so they can be part of the ceremony. Families can also arrive early at 2 p.m. to be included in the program.

LAS VEGAS – Three Nevada Guard Soldiers from 1st Squadron 221 Cavalry were recognized for helping a Virginia woman who was involved in a car crash while serving in support of the Presidential Inauguration in Washington, D.C. earlier this year.

News & Info from your department

KANSAS CITY, Mo. - It is with great sorrow that the Veterans of Foreign Wars (VFW) announces the passing of past VFW Commander-in-...

WASHINGTON - The Veterans of Foreign Wars (VFW) joins with our grateful nation in celebrating the birthday of the United States Co...